Windmills on my Mind

When I was in junior high school, or maybe even elementary, my friend Kim's father began a quest. He began building a windmill in his backyard. It was an odd thing to see soaring into the air behind their small cape - and was painted in brilliant colors of gold and red, and every year it grew taller and taller. I don't remember it ever working - at least not while I still lived there - but he kept building it and he imagined that someday it would be a working turbine, providing power not only for his home and family, but for his neighborhood as well.

After college, the street changed, their house was sold and the windmill disappeared. Where woods had surrounded their house, new homes sprung up. And that's another kind of wind, the winds of change.

Hubby and I just returned from a visit to my hometown. Just a brief weekend to visit my Mom and to help my sister pack up her few remaining things before she and her husband move to Southern CA. On the way there, we saw the most amazing sight. Near Cohocton NY on Route 17, along the crest of the hills lit up by golden evening sunlight was a series of tall stately statues. Far above the conventional dairy and produce farms a new farm is growing. A wind farm - that will be 50 strong when complete - is being built. 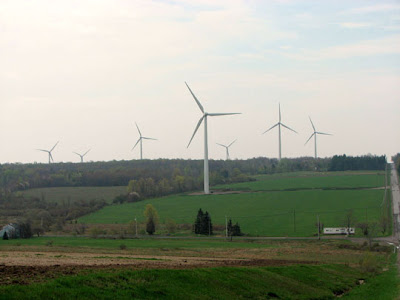 I know that some of the residents oppose the windmills and I wouldn't presume to force my own opinion on them as it is their backyard, not mine. All I can tell you is that I felt such a strange mix of nostalgia for Kim's nerdy father and his technology dreams, along with a strange impression I was getting a glimpse of a distant future. One we imagined as kids in school. Hover crafts. Skyways. Robots. Windmills. Not the windmills of history, with fabric sails and stone bases, but sleek, modern, sculptures that gleam in the sunlight and represent a cleaner, brighter future.

So, I've returned to my own home and I can't get the windmills from my mind. Maybe someday my lovely nerdy husband and I will get the chance to build one in our backyard. Or perhaps we'll have the first solar power in our neighborhood. Or the first electric car. It just goes to show you that our future is here. The winds of change keep blowing.


And I'm finding the breeze quite refreshing.
Posted by Wenderina at 11:42 PM

There's a huge windwill farm along the highway in a desolate part of California--you captured my feelings about it perfectly.

I loved your discriptive writing of the windmills. They are a lovely site along the road to your house and the next trip we should see how many more are completed.

This is my husband's line of work! He builds and maintains wind turbines (wind farms) throughout the US as well as internationally. It's amazingly interesting and beautiful, and I'm so proud of him for being in this profession

Oh my gosh! There are a ton of those around where I live and I really, really, really want one, too. I think they have a strange beauty about them. I'd love to have one in my backyard! Don't think my HOA will approve, though. :)