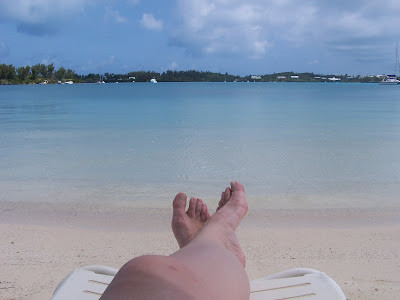 Diagnosis: Too many Monday's like the last post.
Prescription: 4 Days in Bermuda, repeat as necessary
Result: Patient attitude adjustment achieved.
Posted by Wenderina at 9:27 AM 6 comments:

Someone Had to Say It

Today has been a total Monday. Are you ever just sure you shouldn't have faced the world on a specific day? Maybe you're in a foul mood or short-tempered. Maybe the world seems out to get you. Maybe both?

From the moment I arrived and learned a VP - who is high enough on the food chain to know better - had sent a nasty email to one of my staff, the day just went downhill from there. I mean, seriously, this guy makes 5 times what she does in salary and he has the nerve to throw an e-mail tantrum. My favorite part was where he honest-to-god sounded like a 3-year old.

Can't you just hear the whining, sobbing, and foot stomping on this one?

And, I guess, I was just in the mood to take this on today.

Initially, I was absolutely stunned. And yet, I don't know why I should be. This same guy has left sticky notes on staff desks the day after they worked a 12 hour day to meet his deadline which said, "You could do better next time." (and yes, he was serious). And he is also the famous author of the unknown acronym [FBSTCHAC] he wrote on a draft presentation markup, which apparently stood for Fix Background So That Column Headers Are Clear and was pissed we didn't know what he meant.

Since I was "just in the mood" - I forwarded it to his boss. Then I had a discussion with his boss on how to complete the assignment appropriately - taking full ownership of any failures on our part and making no judgment comments upon the VP. Lastly, I sent an email to the subject VP noting how we were going to fix the situation and deliverable and closed with this line:

"In the future, I would appreciate it if you did not respond to my team in a harshly worded email if you do not get what you are looking for but come back to me so I can address it. The buck stops here, as they say."

To tell you the truth, I don't even care.

Someone had to say it.
Posted by Wenderina at 3:57 PM 5 comments: