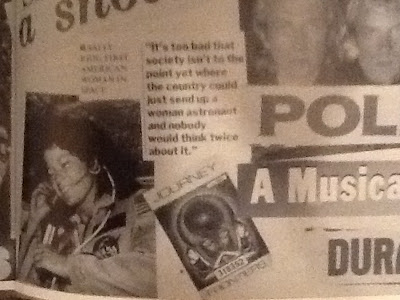 This is a photo of my high school yearbook.

The year I was editor, was the year Sally Ride went into space as the first American female astronaut. I admired Sally. Not because she was the first woman, but because of her grace and calm in the wake of it. So, as editor, I exercised my power and prerogative and squeezed in a great photo and quote between our memories of such groundbreaking moments of 2 feet of snow paralyzing our city, musical pioneers The Police, Journey, Men at Work, Duran Duran and rising star Jennifer Beals of the immortal Flashdance.

Yes, the 80s were a shallow time. As compared to the 2010s...obviously a deeply historical decade.

The quote...just in case you cannot read it, was:

"It's too bad that society isn't to the point yet where the country could just send up a woman astronaut and nobody would think twice about it."

You know what? I thought the same thing. Why is it such a big deal?

What a fond memory - I love what Sally Ride stood for---all the smart women out there just doing their job.