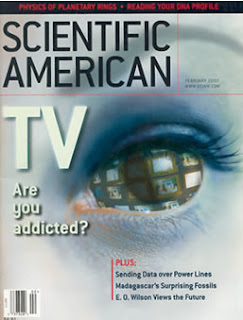 Lately I've been mesmerized by tv.
Did you see the Hulu commercial with Alec Baldwin they launched at the Superbowl? Yeah, that's my mushy brain he's laughing about.
While I think everyone deserves to shut it down and vegitate now and again...it's become total habit (think drug habit) for me to escape work at 7:30PM, hit the house by 8-ish, and proceed to eat my reheated leftovers while curled up on the couch in front of the tv.

Weekends? Yup. The same. I do laundry and I watch tv. Glad I have that pause button for the DVR so I can hit the laundry room, the kitchen, and the bathroom once in a while.

Turns out I'm not alone. If you google tv addiction you'd be amazed at what comes up. Everything from scientific studies with graphs and charts, to support groups, to (love this irony) tv guides and blogs about what to watch tonight. (Enable much?)

One site had a bunch of scientific evidence from 2003-2005 including the average hours per day for leisure activities - look at that spike on TV!

I can't get behind the numbers on the male/female ratio in my household because while Hubby joins me sometimes, he is not nearly as zoned out or tuned in as I am. He has the ability to get up...in the MIDDLE OF A SHOW. (WTF!)..and just say, "I'm tired, I'm off to bed." Or to go into the other room and doodle on the computer, pick up a book, run out for errands, or even head out for a hike or photo shoot.
I, however, am glued to the "boob tube". And with umpteen gazillion channels, the movie package, AND DVR'd favorites, there is never a time when I say, "there's nothing on" anymore. I have a fear that I could become a pasty-faced goggle eyed freak with a self-induced case of agoraphobia and a vocabulary consisting of only one syllable words.

This chart was downright scary...because I had started my quest for blog fodder with a half-hearted tongue in cheek story about tv addiction. Then I looked at this chart...and you know... 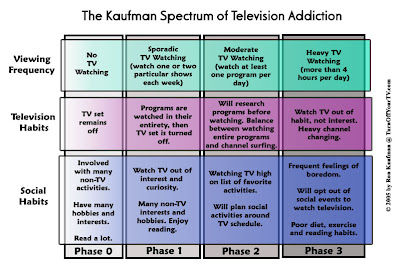 I'm resting firmly in Phase 2. Well, to be honest, I'm pretty much Phase 3.

They say the first step is to admit you have a problem.

This article also goes on to say if you are so far gone (Phase 3) you have to make radical changes not just to watch less TV, but to exchange your tv time for other activities. Something Phase 3-ers have a very difficult time doing. In fact, the article suggests Phase 3-ers could actually experience physiological and psychological withdrawal symptoms just like any other addict.

Maybe I have to seriously consider how to make a change here.

This is pretty timely because I could see that my kids' tv viewing was getting out of control because I'm not at home to monitor as much (they're 14 & 15). I hid all the remotes in the house (4!) before I went to work this morning. It's 8 p.m. and they're engrossed in the books they've been reading for hours.