This is always the time when I grow weary of the politics that come with our lovely democracy. It's not the candidates, or even the rhetoric (although that can be wearing), it's the media. 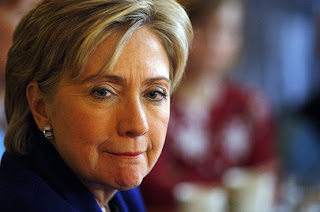 The media coverage yesterday (let me clarify it was mostly TV and Radio- Print media as always seems much more balanced) of Hillary Clinton's "emotional breakdown" was just unbearable. I have no party affiliation, nor will I discuss my leanings toward or against any candidate here. I'm just not up for the political upheaval on my private blog space. This is my commentary PURELY about the election period media.

Why, oh why must the spin always be so damned dramatic? And why, I wonder, do they make the choices they do? Since Clinton has been described as wooden, hard-nosed, overly analytical, etc. why is is a sign of a potential breakdown that she shows a moment of emotion? Is it the Female-hormone thing? Is it just the desire of the media to always tear things down? Why can't this moment be described as a "passionate speech where Clinton demonstrated her total personal and professional commitment to pursuing a better America"?

And even if you buy-in to the idea that a breakdown and exhaustion is playing into this, why was the next story in CBS Radio today about popularity contests? I listened to the story in absolute astonishment when the commentator actually criticized Hillary Clinton for being "the valedictorian who cried because she lost the election for class president to the quarterback of the football team."

Um...hello...I would personally prefer a high school valedictorian (or better yet a Yale Law Graduate?) over the high school football quarterback any day. I mean haven't we seen enough of the dumb jock syndrome for the last 8 years? Since when is it a bad idea for the smartest person in the room to be the one elected president? When did dumb and popular become what we want in a president? (I know there have been a lot of them, but please...can't we raise the expectation?)

And for those of you out there - like me - who were not engaged in the process and didn't vote (my first vote was cast in the last presidential election at the age of 36), please re-think that position. Yes, I know it is often the choice of the lesser of two evils, rather than the greater of two virtues, but the greater of the two evils seems to be getting much much worse. So let's make sure the best choice takes us through the next 4 years. Get out and vote!
Posted by Wenderina at 7:36 PM

She was probably having her period...don't even get me started on the entirely different set of standards under which HC is judged.

I heard a recent comment about her freakin' ankles.

Unfortunately, even the print media is in on this one. NY Post talked about a breakdown. So did a few local papers. I for one don't get the whole breakdown thing - first she was cold and now she's overly emotions. Definitely because she's a woman.

I actually cheered when I heard she won the NH primary. I am not sure who I am actually voting for at this point, but the media pissed me off enough for me to want a victory for her.

Amen, sister. It's sad that in this day and age women are still criticized for being too "emotional." Or not.

I generally follow the WC Fields dictum which says: "Never vote for, always vote against."

And, I won't bore you with my political fancies but I agree, as a longtime member of the media (print, if you please) that the media is often irresponsible and too often manipulative, and I detest the fact that politicians (including Hillary) feel obligated to play to them.

Isn't it the hair that truly makes a great leader?

I am with you! I voted for the first time at 40+ and I am having a hard time with the thought of doing it again...but this time I trying listening to what the person is actually saying - I can't stand all the negativity that goes with politics!